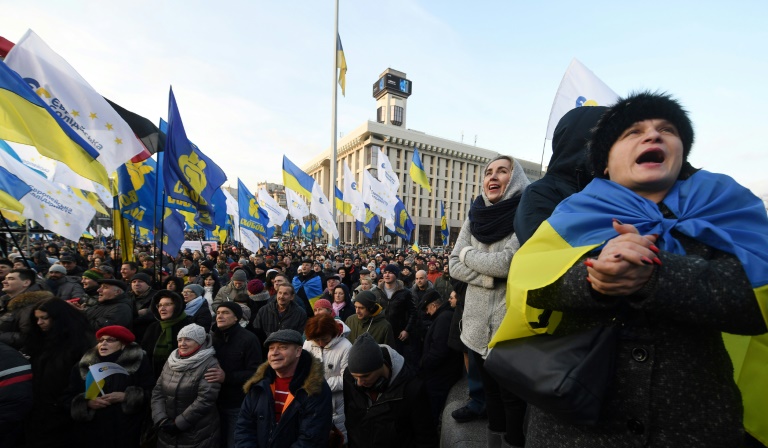 In 2013-2014, the Euromaidan uprising was not only a momentous historical event in terms of the foreign policy direction of Ukraine, but also a profoundly democratic one, with the protesters embracing a concept of citizenship involving individual responsibility to uphold democratic values and to serve the larger community.

8 years after Maidan, Ukrainians remain united in their desire for a democratic future for their country. According to a nationwide survey carried out by National Democratic Institute in August 2021, seventy-six percent of respondents want Ukraine to become a fully functioning democracy.

With the Russian mobilization of an unprecedented number of troops and military force on the borders of Ukraine, the threat of escalation of the 8-year conflict over the occupation of Crimea and parts of the Ukrainian territory in the eastern parts of the country into a full-scale invasion of Ukraine continues to evolve. But it is apparent that the conflict is as much about democracy and ideology as it is about borders.

In this webinar organized by the Danish Foreign Policy Society and the Association of Ukrainians in Denmark we will hear voices from Ukraine, who wish to dispel some of the myths created by Russian disinformation campaigns. How do modern Ukrainians view the state of democracy in Ukraine and what are its chances against a significant authoritarian power like Russia? And what role should Denmark play in a Russia-Ukraine war?

Danylo Lubkivsky, a Ukrainian diplomat and civil activist, Director of the Kyiv Security Forum, Ukraine’s foremost public platform for high-level discussion on national, regional, and global security. In 2014, Danylo served as the Deputy Foreign Minister of Ukraine, as well as the diplomatic advisor to the Prime Minister of Ukraine in 2015-2016. His areas of interest include political analysis and planning, strategic communication, humanitarian cooperation and public diplomacy.

Alim Aliev, Deputy Director General of the Ukrainian Institute. Alim is a human rights defender, curator of educational and cultural projects, researcher, and media consultant. Co-founder of the “Crimea SOS” NGO. Co-author of the book Mustafa Dzhemilev. Unbreakable about the Crimean Tatar leader. He coordinates the Ukrainian and Crimean Tatar literary project Crimean Fig, is a member and rapporteur of advocacy missions to the Council of Europe, the European Parliament, the OSCE, the UN Security Council, EU and US political institutions on the situation in Crimea. Member of the executive board of PEN Ukraine.

Natalia Popovych, a civic activist and international communications expert, co-founder of Ukraine Crisis Media Center (UCMC) and founder of One Philosophy consulting group. In 2017-2018, as part of the co-creating of UCMC’s Hybrid Warfare Analytical Group, Natalia has co-authored research of the perceptions of European values on Russian TV. She is a member of the senate of the Ukrainian Catholic University and a board member of the Ukrainian Institute.