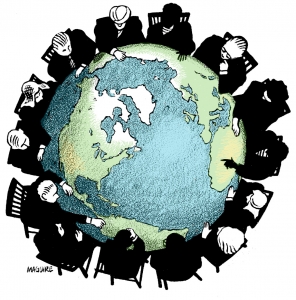 MUNICH – The international order may be in its worst shape since the end of the Cold War. Those trying to keep the peace are overwhelmed and often helpless in the face of seemingly endless crises and reckless spoilers. When world leaders convene in Germany for the 52nd Munich Security Conference this weekend, they will attempt to chart a path through some very dangerous territory.To be sure, the past year has seen its share of good news. Sustained diplomatic efforts brought about two breakthroughs with potentially far-reaching positive implications: the deal on Iran’s nuclear program and the Paris climate agreement. But the rest of the picture is bleak.

The big crises of the day transcend – and even call into question – international borders. The wars in Syria and Iraq have not only fueled the dissolution of political order in the Middle East, but have also left Europe struggling to find a common solution to the influx of refugees. Not since the end of World War II have so many people been driven from their homes.
Indeed, the Middle East has come to epitomize the way a conflict can make itself felt far beyond the battleground. The conflict in Syria has long since ceased to be a civil war; it has become a full-fledged regional crisis. The Islamic State – with its territorial base, aggressive online presence, and international network of militants (including followers in Europe) – has proved to be a truly global organization.

Elsewhere, the outlook is no brighter. In Libya, Mali, and Afghanistan, states have collapsed or are at risk of failing. Relations between Iran and Saudi Arabia could hardly be worse, absent direct military confrontation. Tensions between Turkey and Russia have grown precipitously. And, online, governments and private actors alike are abusing the modern world’s interconnectedness, threatening sensitive information and critical infrastructure across the globe.

Instead of the “ring of well governed countries” the European Union envisaged in its 2003 Security Strategy, the continent has come to be surrounded by a “ring of fire.” Europe’s security is under threat once again; military exercises are being conducted with increasing frequency, and the Ukraine crisis remains unresolved.

Nonetheless, major political figures seem to believe that they can respond to transnational challenges by seeking refuge in national myopia. This futile approach will produce only pseudo-solutions – or worse. Some governments have responded to the migration crisis with beggar-thy-neighbor policies, forcing adjacent countries to bear the brunt of the burden, and consequently, a core component of European integration – the border-free Schengen Area – is under threat.

Even the traditional supporters of a liberal global order, one based on multilateralism and international law, seem to be struggling to believe in their ability to shape events. Claims that the United States is retreating from the international arena are probably exaggerated, but in at least two of the defining conflicts of recent years – Ukraine and Syria – the US has not played as prominent a diplomatic role as it once would have.

Europe has been handicapped by several major problems: a shaky consensus on sanctions against Russia; continuing questions surrounding the euro; the threat of a British exit from the EU; and a resurgence of illiberal nationalism and populism. If Europe keeps spiraling into dysfunction, it will not be able to play a meaningful role in the future.

As states fail and governments crumble, rogue leaders are stepping into the power vacuums. In Afghanistan, the Taliban’s resurgence is undermining more than a decade of progress. In Africa and the Middle East, local strongmen and Islamist extremists are blocking progress toward peace or unleashing more strife.

Meanwhile, tensions between some of the world’s most powerful countries are starting to rise. Russia under President Vladimir Putin has been keen to demonstrate that it is a global player – even as its economy suffers from international sanctions, plunging oil prices, and a lack of modernization. There have been a few signs of a potential rapprochement between Russia and the West, but disagreements over Syria loom large, especially after Russia supported an advance on rebel-held Aleppo by the Syrian government, which brought a rapid end to the latest round of peace talks in Geneva. Russia’s failure to implement major parts of the Minsk Agreement in Ukraine is another important sticking point.

China is beginning to involve itself more in global issues. But instead of becoming a responsible stakeholder in the liberal international order, it seems to have chosen to focus on creating parallel governance structures, which it can shape according to its own preferences. And its increasing assertiveness – most visibly in the East and South China Seas – continues to worry its smaller neighbors, who wish for a stronger US role in the region.

We are likely to be entering a period of growing risk, rising uncertainty, and fundamental transformation – the beginning of a less stable international era. Responsible leaders must work together to reconstruct the international order, strengthen institutional arrangements, and stem spreading chaos.

The risk of a major interstate war may still be remote, but for the first time since the end of the Cold War the escalation of violence between major powers cannot be dismissed as an unrealistic nightmare. Were that to happen, the challenges facing the world today would pale in comparison. 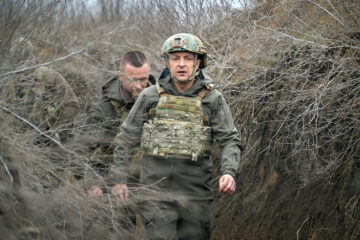 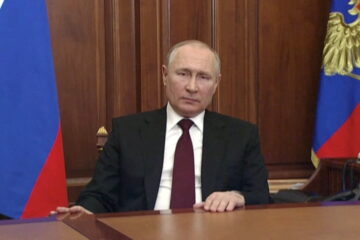 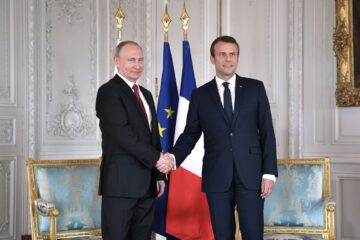